My Dad called. He said, “I wrote it all down, about our adventure of moving to Tahoe and how I remember it.” It came yesterday in the mail, and the pages tumbled out when I tore the envelope. “Do you think you could type it all down since I am not such a good typist?” I want to be able to read it, he said.

And in the writing it, and the reading of it, I knew he was reliving something powerful.

“I will do my best, Dad,” I said. And it’s an honor. When someone has put their heart on a page, you have to be careful with it. It’s something almost sacred that they are trusting you with, not just words on a page. I will keep the handwritten version for myself and I will save the other version on my computer, the one I will type neatly with no lines crossed out. No bold underlines. I will try to put the feeling in it, just the way he felt it.

I will do my best to bring it to life as he lived it.

Because our stories, our memories, is what we have. In sharing those, we open ourselves, our hearts to each other.

And it’s always a risk.

Because there is always the chance they won’t see it or feel it the way we intended. And that’s okay. We still have to share it. 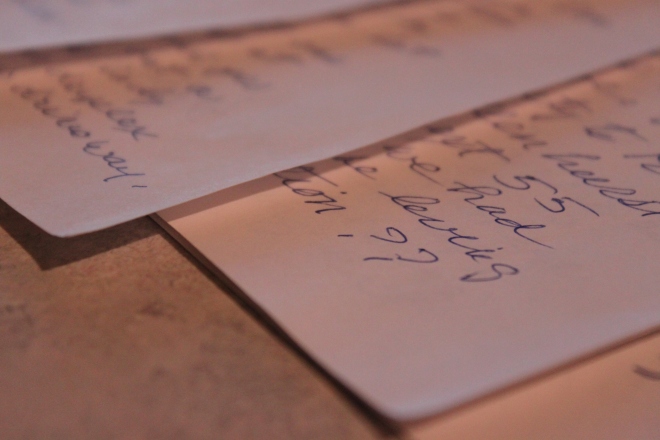 As I picked up the pages again, I saw the way he wrote and I thought of how someday he won’t be here. Even now, I squeeze my eyes shut to keep tears from leaking out because I know it’s true. Someday the letters will stop. And I will imagine him sitting in a corner spot of light in Heaven with a big feather quilled pen. Writing his thoughts of all the beauty he sees, and meeting Jesus for the first time.

I have words in my treasure box, so many words gathered over the years. Sacred ones. The lid no longer shuts, but I slide them in anyway.

Because words from someone you love are always sacred.

I will do my best, Dad with your memory. Here is my only memory of it. I remember standing in something I now know was snow and crying because I didn’t like the cold.

And someone, probably you, sticking a ski pole in a snow bank so I could see the holes it made.

I think maybe you can fill the blanks in my mind, since I was only 2.

We will relive it together and then it will be ours to share.

For those of you who didn’t read my last one, you can read it here. I have been capturing some memories for Elaine from when she spent summers in Texas visiting her Grandparents (and other relatives). I thought it would be fun to put myself squarely in the memory myself and write it as she remembers it. I got her Grandparents mixed up last time but this one is historically accurate. So here goes.

When my Grandaddy on my Mama’s side met Granny she already had five kids. Then they had 5 together and one died so that left 9 kids all together. After that he left the family and married another woman named Lou who lived in the same town. Needless to say his leaving the family sparked some very hard feelings all around from his kids, generations on down the line.

Lou had two kids of her own when they met and they had four more after they married. Sounds kinda one of those story problems we used to  get in math class.

All this happened before I was born. That’s a lot of emotional drama to be plunked down in the middle of, but the only thing I really remember about it was my Grandma telling me, “You better not be calling Lou, (or that woman) Grandma.”

To her credit, Lou accepted us Grandkids as her own and I always remember feeling welcomed at their house. She had a big square farmhouse kitchen and she really knew her way around it. We had many a meal around that big old table. Lou always fed us well.

Their house wasn’t nearly as important as what lay around it to us kids though. In fact, if they had lived next to the Land of Oz it wouldn’t have been much more impressive to us as that big green vast wonderland that was the football stadium and the adjoining baseball park outside the back door.

My Grandad managed a semi-pro team so they lived right on the stadium grounds. Think, “Field of Dreams.”

To those of you who aren’t familiar with how important sports are in Texas, especially football, let me tell you, it is everything. Small towns like San Angelo were built and centered around football and baseball games. His training methods though, were a little unconventional.

On many a bright summer day, I can still remember him saying, “C’mon Elaine, we are gonna lay some pipe today.” That meant training day for the team. I would ride on the back of the jeep while the guys he coached would run behind it. Then he would throw the pipe down as they went and they would lay it.

Sometimes they would drop from sheer exhaustion in the heat. I would say, “Grandad, he’s lying in the grass lookin’ up at the sky.” He would say, “Don’t worry, he’ll make it.” And we’d go onto the next place and drop the next guy off. On the way back around the field he’d go back and pick them up.  By then they would have staggered to their feet and reconvered enough for the next challenge.

In those days athletes weren’t pampered, but we did consider them the celebrities of our town. Provided they survived Granddaddy’s training practices, that is.