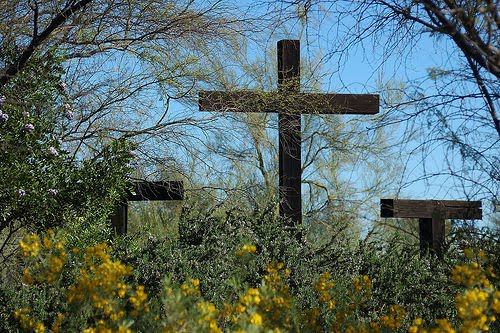 There is only one question that truly matters in this life and how we answer it will determine our eternal destiny. Jesus asked it of Peter, shortly before He went to the cross:

When Jesus came into the region of Caesarea Philippi, He asked His disciples, saying, “Who do men say that I, the Son of Man, am?”

So they said, “Some say John the Baptist, some Elijah, and others Jeremiah or one of the prophets.”

Simon Peter answered and said, “You are the Christ, the Son of the living God.”

Jesus answered and said to him, “Blessed are you, Simon Bar-Jonah, for flesh and blood has not revealed this to you, but My Father who is in heaven.

Peter had the right answer. And either knowingly or unknowingly, every one of us will answer it before we leave this life.

How do describe someone as big as Jesus? It’s not easy. You can’t really wrap words around Him so that He is nice and neat and perfectly described, though He is perfect.

Jesus is not simply the best person who ever lived, He was and is God. He said that about Himself and that was part of what got Him killed. He was God before time began and He stayed God when He briefly came to this earth.

Jesus was constantly confounding people with His radical thoughts, actions and the things He said. He didn’t do what was expected. He went out of His way to talk with people others ignored.

He rocked boats, incited riots, hung out with sinners and people from the wrong side of the tracks. He had dinner with tax collectors and prostitutes and sometimes even those closest to Him were confused by the things He said.

He made the weather obey. He sent demons back to where they came from. He regularly healed the sick and raised the dead. He knew people’s thoughts from far off. He was a reader of hearts, and mender of the same.

He made a lot of “Religious” people mad and never got involved with politics. He loved spending time with kids. He was an ordinary man who was comfortable in work clothes yet people threw their cloaks in His path because they perceived He was royalty.

He understands me. He knows my deepest thoughts, fears and failings and He loves me anyway.

He wants to enter into every part of my day; sometimes He comes as soft as a dove and sometimes as powerful as a lightning bolt and I love Him so much that sometimes it brings me to tears. He is my closest friend and also my Savior.

You see, we all need someone to save us because we can’t save ourselves. God says, even the best we have only amounts to filthy rags. But Jesus had the qualification to die in our place, because He was fully God but also fully man.

He is the only One who can satisfy our deepest longings. He’s that thirst of the heart we are born with, the one we know we need but have no idea how to quench. And no matter how hard we try to fill ourselves up with what this world has to offer?

We will never be filled unless we have Him.

He will also break your heart if you let Him, because He will ask you to do things sometimes that are painful but necessary, like kill your ego. He is waiting at the end of your broken dreams and restores the hope that this world tries so hard to snatch away.

These aren’t just hollow words I am saying. I have been to that place of despair and I am telling you, He is the only one who can get you out. There is no temptation He doesn’t understand, that’s why He is fully equipped to deliver you.

He’s the One left standing when everyone and everything else has packed up and gone home. There is no need to try to clean yourself up for Him because we can’t anyway. He is a “come as you are God.”

It’s not beneath Him to meet me anywhere, including the bathroom stall. He wants to hear from you too.

He has stood with me through the shadow of death and walked with me until I came out the other side. No one has ever been asked to suffer more than He did. He prayed until He sweat blood because He was thinking of me and experienced temptation without once faltering.

Nothing I do could ever surprise Him or make Him not love me.

The day He was crucified the earth quaked and the sky darkened because the people realized they had just killed an innocent man.The curtain in the temple was torn in two and so was time. People rose up out of the ground, and then He said, “It is finished.”

That day, the most important question we will ever answer was hung on a cross against a darkened sky and the door to Heaven was propped open.

Jesus opened the way to Heaven to all who believe in His name, all you have to do is trust Him with your life.

I can’t promise it will be easy, but I do promise you will never regret it.

Wherefore God also hath highly exalted him, and given him a name which is above every name: That at the name of Jesus every knee should bow, of things in heaven, and things in earth, and things under the earth; And that every tongue should confess that Jesus Christ is Lord, to the glory of God the Father. Philippians 2:9-11