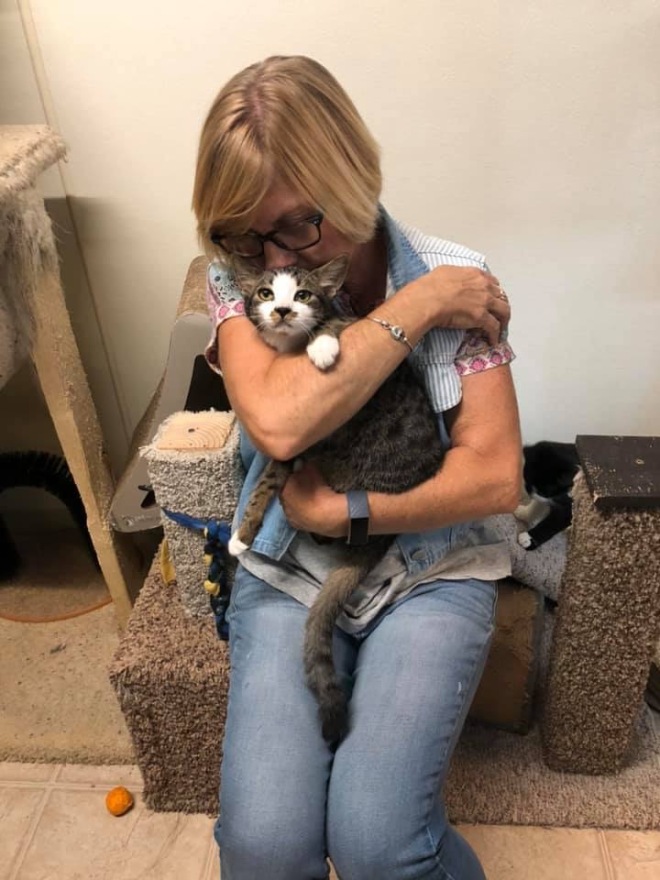 I’ll never forget the first time I saw him. As we rounded the corner of the medical complex to go in, there he was. The smallest kitten, no bigger than a minute, all alone. He was scared and crouched behind a shrub. A lady in clacking heels was nearby with a small box. She said, “I’ve been trying to catch it for hours.” I looked at Elaine who sighed big time because she knew I could never leave the situation alone. She proceeded to the lab to get her blood work with a sense of foreboding that the day had just taken a turn and somehow she would be involved. I seem to find kittens and cats everywhere. It’s not like I try.

Anyway, this office lady was on her break and clutching this box to put the little guy in. I crouched down quietly and held my hand out for him to smell and he walked right up to me. My heart did a flip as he nuzzled against my neck and purred. She looked on in amazement and said, “I am taking him to the pound to see if they will take him.” I said, “Let me make a call.”

We exchanged phone information and I told her I would wait right there. In a small panic I called one of the patron saints of Animal Friends Connection, Marion. She told me that if I could keep him a few days she would see that he got into the vet. It was no surprise to me when she came back with the little guy in the box to tell me they had no room at the local pound.

I put him in a carrier and off we went to my Mom and Dad’s house where I explained the situation. I was able to keep him there two days. My Mom has some memory issues and she was upset by the little guy’s presence. She kept asking why the cat was here and who it belonged to. The Angels at AFC accepted him into their community. I had named him Stash by that time for his brown mustache. He promptly went to the vet where he was treated for several things. I gave them money to help with his care. I was already hopelessly attached.

I went to visit him in quarantine after the vet. He was being treated for several things common to kittens left to fend for themselves. He peered out through the cage at me but I couldn’t hold him. My heart ached and ached until finally he was taken out of quarantine and brought into the shelter where I could go and visit. All the shelter workers were sure I would adopt him and in my heart he was already mine. And yet, I had a elder cat at home who had been a faithful friend for 19 years and I didn’t know how he would react to a kitten. I had done that in the past with disastrous results.

When you volunteer at a shelter, this is the risk you take. You wonder when you will meet “The One” who fully captures your heart. You tell yourself the rewards outweigh everything else and really, they do. But now it had happened to me. And every day I wrestled.

Every time I went to the shelter I wondered if I could resist bring Stashie home. Each time, after I loved on all the other cats, I spent extra time cuddling him and holding him close. Maybe it was my imagination that he remembered me as he nuzzled my ears. But maybe it wasn’t. I cried over him. One particular time coming home from the shelter Elaine had her phone ready to video his homecoming. But in the end, I just couldn’t do it.

Our Briggs has been so loyal for so many years, and his health is not the best. I could not bring myself to subject him to a new cat friend. I know me, if he rejected him and was miserable, I wouldn’t give Stashie back, I would deal with it and it wouldn’t be fair to either one. So for now I go visit, and I’m praying for the best home for him. He is a great cat. He doesn’t try to get away when I pick him up. I can hold his paws and he doesn’t mind.

For now, it’s a rescue story. Soon, I hope it will be an adoption story. Maybe he’ll even get adopted with a special friend to grow up with. The good folks at Animal Friends Connection continue to care for Stash and all the other doggies and kitties who will someday find forever homes. And I am so grateful for all they do.