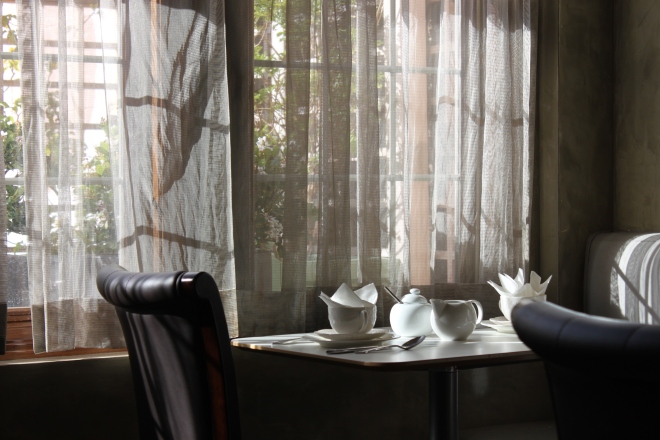 The next morning I was like a little kid, hyper and chomping at the bit to get down to the ocean because, well….the water was so close! I have never lost my excitement at getting that first glimpse of the water, it’s tied to so many good memories I have as a kid, and each time is magic, but breakfast was included in our stay and more importantly, I was in dire need of coffee.

As you can see, I fell in love with how the light was streaming in the morning windows…….and the coffee was much to my satisfaction. I had a feeling, since the night before, Nashua had shared with us that she enjoys a good cup of Turkish coffee. Somehow I knew it would be strong enough to stand up to my specifications and I was not disappointed.

We were ushered to a table and given fresh orange juice, and a wonderful frittata filled with cheese and potatoes with a side of sausage and fresh fruit. It was all excellent and it tempered my anxiety about getting on the beach enough that I could sit and enjoy it, as well as take a couple of pictures.

After that, a long walk on the beach was in order. We watched dogs play and collected some interesting rocks along the shore. The weather couldn’t have been better and that added to the almost surreal atmosphere. It was like God’s stamp of approval on the day. Having spent many cold and foggy days at the shore, I was ready for anything.

When we came back we headed up to the rooftop again, since we had only seen it at night before. The view from the rooftop was stunning……….It is definitely yet another selling point to this Hotel. Unfortunately, the only photo I got was with my iPhone and it wasn’t very good, however you can check out the Hotel website, where you may be able to see it.

Another benefit of staying in the smaller Hotels is the people you meet. I have already told you about Nashua, but we also met a very charming young gentleman named Lance who also is employed by the Hotel. He was very well spoken, with an unbridled enthusiasm for life that was catching. He poured us each a glass of wine and the four of us talked together in the lobby for a very enjoyable hour or so and I never got the feeling they were merely being polite, they were really interested.

We also met a couple from Brisbane, Australia, both very friendly, celebrating their anniversary. They asked for a recommendation for dinner and we gave them the name of the place we were going to right down the Pier, the Sandbar Grill, a local hangout which was excellent. We ended up seeing them come in as we were finishing up. As we left they were getting on very well with the couple beside them.

Unfortunately I never knew quite what he said because his accent was so thick and he talked so fast, we never understood a thing he said. He sounded a lot like “Gimli” from Lord of the Rings. We nodded back and forth a lot. Fortunately, we understood his wife quite well so that helped.

We also met a very interesting lady named Rika, who is a film set designer in LA. She talked to Elaine quite a bit, being interested in just about everything. She wanted to know how long she had been driving her motor home.

She had an elegant, yet understated and humble way about her. Graceful in the way that always makes me feel somehow lumberous and awkward, while not meaning to. She is also part owner of two restaurants and I love the name they chose: Can’t Fail Cafe.

We were thinking of heading out after only one night but we were so captivated by Hotel 1110 that we had to stay another night and I am so glad we did. It was a great send-off to the rest of our trip along the coast. We ended up meeting up with Rika again at Phil’s for lunch before we all went our separate ways. Phil is famous for winning a throw-down against Celebrity Chef Bobby Flay for his Cioppino.

Hotel 1110 was a delightful surprise and I think I can speak for both of us when I say that we will be back this way again someday. Hopefully sooner rather than later.