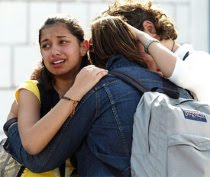 A woman with a scarf over her head hoists her six-year-old up onto the first step of the school bus. “Goodbye,” she says.

A father on the phone with his freshman son has just finished bawling him out for his poor grades. There is mostly silence at the other end of the line. “Well, goodbye,” the father says.

When the girl at the airport hears the announcement that her plane is starting to board, she turns to the boy who is seeing her off. “I guess this is goodbye,” she says.

The noise of the traffic almost drowns out the sound of the word, but the shape of it lingers on the old man’s lips. He tries to look vigorous and resourceful as he holds out his hand to the other old man. “Goodbye.” This time they say it so nearly in unison that it makes them both smile.

It was a long while ago that the words, God be with you disappeared into the word goodbye, but every now and again some trace of them still glimmers through. Frederick Buechner

Yes, I would much prefer the phrase “God be with you.” According to Wikipidia, that is where the term “goodbye” comes from….I never knew!

Saying goodbye always feels wrong, there is something within our soul that rails against it as abnormal and unnatural. That is because it is. God never intended for us to ever have to part, in life or in death…..Because of what Jesus did, none of us have to face that “eternal” goodbye; so while we have this earthly sorrow now, we have that promise that we will see each other again in that place where goodbye is never uttered, that sorrow never felt.