Do not fear, for I am with you; do not anxiously look about you, for I am your God. I will strengthen you, surely I will help you, Surely I will uphold you with My righteous right hand.’ “Behold, all those who are angered at you will be shamed and dishonored; those who contend with you will be as nothing and will perish. Isaiah 41:10,11

If we could see God’s grace all around us…….just imagine. I envision something like these Palo Verde tree blossoms which fall everywhere here a certain time of year……we would see it everywhere we walked, for He has promised to hem us in on all sides with His love and protection.

That doesn’t mean that our path will be trouble free and easy. In fact, Jesus promised that in the world we would have trouble. But right after that He tells us to take heart because He has already overcome it. That means, if we belong to Him, so have we! Whatever the world dishes out, we can take it my friends.

And I love what He says right before that……”I have told you these things, so that in me you may have peace.”

We can rest in the hollow of His hand. Of that we can be certain.

And when we close our eyes at night, can’t you just feel His grace keeping you? For He neither slumbers nor sleeps.

There is much fear and uncertainty in our world today, but we don’t need to pay attention to it. We don’t have to worry about the economy……

our jobs or lack thereof

or anything else that keeps us up at night.

Our Heavenly Father knows we need all these things. So, whatever you are worried about today, give it to Him, He can handle it!

“Who did this? Who made it happen? Who always gets things started? I did. God. I’m first on the scene. I’m also the last to leave. Isaiah 41:4
The Message
And a special prayer for Elaine, my best of friends. You take care of everyone else, but today and every day He will take care of you! He walks behind you and before you today….. May He keep you in perfect peace today and cast away all fear! Me

Bunny is busy too, zig-zagging further down the street. It was a gilded sunrise, everything washed in peach……I had a great night’s sleep and I feel rested, first time in four days.
The moon still hangs lazily above the cloud bank to my right. I guess she is not ready to wake up on the other side of the world just yet.
What a luxury it is to sit here and watch the world wake up.
In my memory, I see myself, my Dad, a group of us standing in a circle holding hands on a green lawn, still damp with dew. We are singing the song, “Morning Has Broken.” Celebration in the air……
It is Easter sunrise.
Today I had another.
﻿ 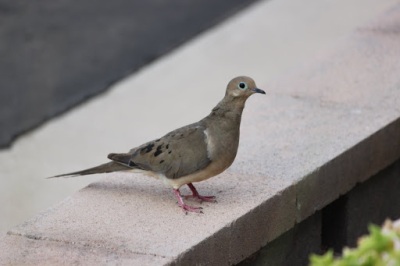 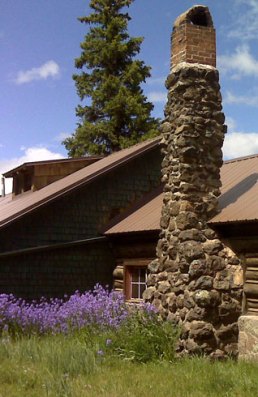 On June 11th, what has now become Arizona’s largest wildfire in history was started. It was human caused, reportedly by a campfire. Around 534,639 acres have burned. The Wallow Fire, as it has been named, is dying down at last. My heart was broken when I read about some of the most beautiful country in our state going up in flames, not to mention the houses and towns threatened. No human deaths occured, which is a miracle. I am happy to say that one of my very favorite towns, Greer has been spared. Go here to check out a great place to stay if you ever find yourself in our State.

Such a devastaing fire, started by one small flame……that’s is what was on my mind when I read this verse from James:

In the same way, the tongue is a small thing that makes grand speeches……..
But a tiny spark can set a great forest on fire. And the tongue is a flame of fire. It is a whole world of wickedness, corrupting your entire body. It can set your whole life on fire, for it is set on fire by hell itself.
People can tame all kinds of animals, birds, reptiles, and fish, but no one can tame the tongue. It is restless and evil, full of deadly poison. Sometimes it praises our Lord and Father, and sometimes it curses those who have been made in the image of God. And so blessing and cursing come pouring out of the same mouth. Surely, my brothers and sisters, this is not right!

The other morning I illustrated the validity and truth of Scripture with my own actions. I wasn’t planning on it, of course, but I did it all the same. It happened as I pulled into the parking lot at work, where we have recently installed solar panels. The fact that they are a wonderful power source is a side note to what really matters to those of us who leave our cars out there in the baking sun for 12 hours now that it is approaching 108-110 in the shade. Covering. They only provided us with two rows of them, in a virtual sea of spaces, however. To say that these are much sought after spots is an understatement.

I had just finished praying as I approached what I thought was an available spot. There was a motorcycle parked there. Immediately I cursed them. Yes, I did. And then I had to pray again.

How quickly my heart and my tongue can turn from blessing to cursing, Father, forgive me. Sweet and bitter water out of the same fountain…..

And yet, He is faithful to forgive….once again.

I think of that devastating fire, all the damage that will take so many years to restore. I think of all the destruction that negative words can cause and how maybe someone can never ever be restored, repaired from the hurt that goes so deep. I think of how much good that wonderful words can do. How a face can light up from a simple compliment.

It is humbling…..makes me want to do better.

For the LORD’s portion is His people;
Jacob is the place of His inheritance.
“He found him in a desert land
And in the wasteland, a howling wilderness;
He encircled him, He instructed him,
He kept him as the apple of His eye.
Deuteronomy 32:9,10

Monday was a tough day……It was a day where months, actually years of stress caught up and culminated in words that have been bottled up far too long. It had to be said……and she had to get out. So we went…..fast. Destination: Anywhere but there. Caregivers of the very demanding understand this need to escape.

Who knows whether the words stuck. They were probably forgotten within 10 minutes.That is the thing with Alzheimers, you never know what sticks and what doesn’t. She is not at the stage where she would be in danger alone……yet, although that will come. So we went.

No one tells you. The rules change daily. What is okay one day is met with anger and denial the next. A day trip was necessary, crucial…..sanity was precariously balanced on the edge of a very fine line.

Grabbing my camera I said, “Let’s go to Globe, they have old buildings and it’s not too far away.”

And God gave one of His unexpected little surprises, well actually two. A call came on her cell while we were driving around……cousin Sandra, two states away. A welcome voice from someone who understands the situation and everyone involved. Healing balm for a hurting heart.

Driving along I saw some pretty plants and a sign that said, “Botanical Gardens.” We stopped and found a neat surprise there, a place called  Besh Ba Gowah “Place of Metal” Archaeological Park. The name is referring to the mining that took place there. It was an old Salado pueblo ruins that had been excavated and partially reconstructed.

We paid our 4 dollars and were invited to watch the 15 minute video, which we skipped. My camera was itching in my hands….God gave a gift……Sometimes He speaks in desert blooms. It was like He was saying……….”This is for you………” 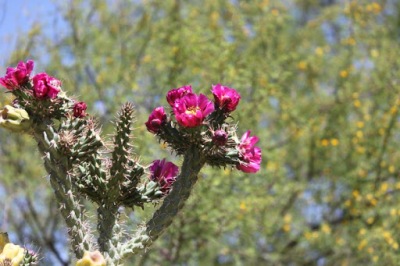 This one reminded me of a fire-cracker…..

As we walked through, we heard the Spirit speak in birdsong…..saw the glory of Him in the blooms that even thorns do not prevent…..
heard His whisper on the breeze,
Telling us all the while that He loved us and longed to give us rest……

In His Presence……
it was very good.
Thank you, my friend. I am so glad you insisted we get away.
You knew how much I wanted a camera day.
It was one of those God things that it turned out like it did.

Our Lady of the Blessed Sacrament, Miami Arizona
Some other interesting buildings in Globe, Arizona which is close to Miami. Yes, there really is a Miami, Arizona….some palms but no water!

Globe is one of those funky old mining towns that popped up during the late1800’s and early 1900’s. I love some of the old buildings there including this one with the pyramid shaped steps.

Courtyard of Blessed Sacrament Church
and this was the funniest thing I saw…..

Rent is real cheap, provided you aren’t afraid of heights! If you can’t climb you’re out of luck!
Follow Lori's Prayer Closet on WordPress.com