For the LORD’s portion is His people;
Jacob is the place of His inheritance.
“He found him in a desert land
And in the wasteland, a howling wilderness;
He encircled him, He instructed him,
He kept him as the apple of His eye.
Deuteronomy 32:9,10

Monday was a tough day……It was a day where months, actually years of stress caught up and culminated in words that have been bottled up far too long. It had to be said……and she had to get out. So we went…..fast. Destination: Anywhere but there. Caregivers of the very demanding understand this need to escape.

Who knows whether the words stuck. They were probably forgotten within 10 minutes.That is the thing with Alzheimers, you never know what sticks and what doesn’t. She is not at the stage where she would be in danger alone……yet, although that will come. So we went.

No one tells you. The rules change daily. What is okay one day is met with anger and denial the next. A day trip was necessary, crucial…..sanity was precariously balanced on the edge of a very fine line.

Grabbing my camera I said, “Let’s go to Globe, they have old buildings and it’s not too far away.”

And God gave one of His unexpected little surprises, well actually two. A call came on her cell while we were driving around……cousin Sandra, two states away. A welcome voice from someone who understands the situation and everyone involved. Healing balm for a hurting heart.

Driving along I saw some pretty plants and a sign that said, “Botanical Gardens.” We stopped and found a neat surprise there, a place called  Besh Ba Gowah “Place of Metal” Archaeological Park. The name is referring to the mining that took place there. It was an old Salado pueblo ruins that had been excavated and partially reconstructed.

We paid our 4 dollars and were invited to watch the 15 minute video, which we skipped. My camera was itching in my hands….God gave a gift……Sometimes He speaks in desert blooms. It was like He was saying……….”This is for you………” 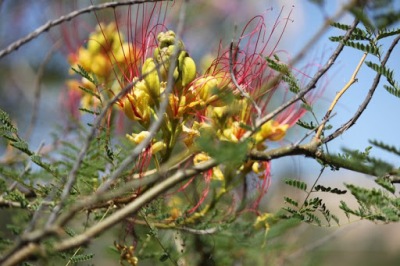 This one reminded me of a fire-cracker…..

As we walked through, we heard the Spirit speak in birdsong…..saw the glory of Him in the blooms that even thorns do not prevent…..
heard His whisper on the breeze,
Telling us all the while that He loved us and longed to give us rest……

In His Presence……
it was very good.
Thank you, my friend. I am so glad you insisted we get away.
You knew how much I wanted a camera day.
It was one of those God things that it turned out like it did.

One thought on “The Desert Speaks”