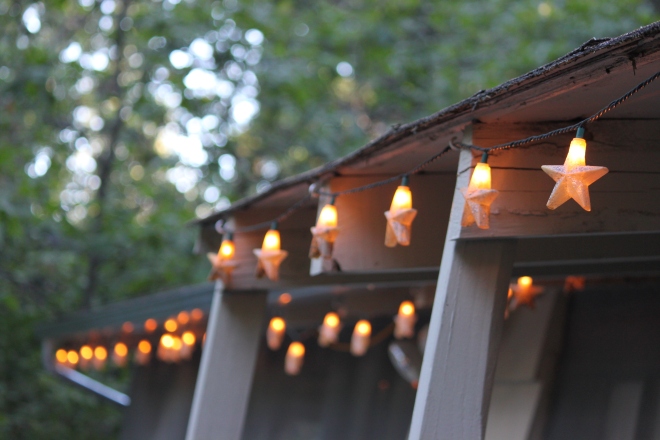 I made my way down to the river even though I knew I wouldn’t be there long. It was early morning, still dark as it usually is when I go. I didn’t need to see it as much as I needed to feel it. Kind of like I feel about God. I needed to thank Him for the good day I had. A big gold star was shining overhead and the crescent moon was on the other side, peeking through the bare branches with a star right next to it. There was a Holiness to it.

There in the little river shack, I knelt and thanked God for the good day. Lately I have felt something like Plexiglas around my heart, or maybe teflon. Nothing has quite reached me, call it a form of depression or unease. Whatever it is, I felt the platelets shift yesterday and it felt really good to feel some joy leaking in. It was that thing with feathers that Emily Dickinson so eloquently wrote about:

“Hope” is the thing with feathers –
That perches in the soul –
And sings the tune without the words –
And never stops – at all –
And sweetest – in the Gale – is heard –
And sore must be the storm –
That could abash the little Bird
That kept so many warm –
I’ve heard it in the chillest land –
And on the strangest Sea –
Yet – never – in Extremity,
It asked a crumb – of me.
I had a good day at work the day before, and later that night we went to a local place, the place where I got married so long ago. It’s changed greatly, now it is a full fledged spa, with a vintners room and additional rooms. When I was married there almost 40 years ago now,  it was a little old Victorian country house with a garden and that part of it is where we listened to a three piece ensemble. I distinctly remember the day Mom and I went there to discuss the ceremony. It was a fall day and windy, and I remember how the leaves looked coming down. It was a special memory between she and I. I will remind her of that when I see her.
We sat and sipped wine and met some lovely people, one of whom auditioned for the voice. The other two, a couple sat down next to me and the lady explained she was an author and historian and they were there to interview an owner of the Inn and write his life story. So we talked about different authors and she said she liked my hat. We exchange cards, I dug my homemade crumpled Staples version, and she her crisp eloquently done one.
As we stepped outside I heard a commotion, which was Santa’s firetruck all decorated with lights. I wrote another story about this on Dan King’s “Bible Dude”blog which you can read here. I jumped up and down like a kid and cried…….”Santa, Santa!!!” They drove right past us and we waved and they honked and we all shouted our Merry Christmases.
What are the odds, that it would be coming by right then? Does God mind when we indulge in a little fantasy about Santa? I don’t think so. I actually think he sent it for us because we needed it.
Just like we always need Him.

One thought on “The Thrill of Hope”