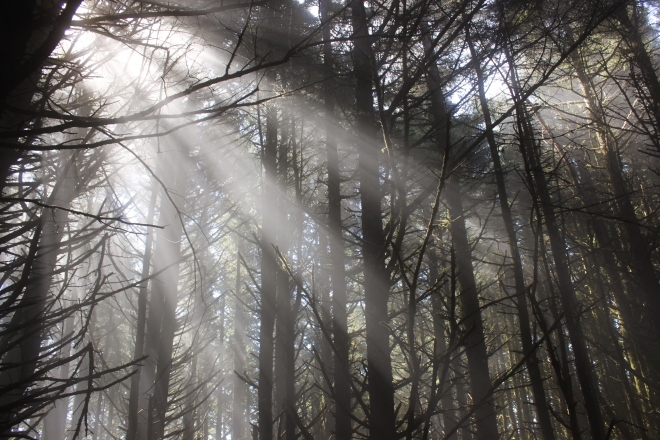 “Do not forget to show hospitality to strangers, for by doing so, some have entertained angels without  knowing it.”  Hebrews 13:2

It was one of those spur of the moment stops. The kind we said we’d do when we planned this 3800 mile road trip. We turned down a road because I was enamored of the amount of vegetation, and the promise of a stunning view at the end of the road. Oregon held shades of green that we just don’t see in Arizona and we made many stops along the way. We turned down a road that had a marker for the Pacific trail and winding our way down to the bottom we saw a hiker who seemed to be in distress.

He was carrying a backpack but not an overly large one, certainly not large enough to spend nights in the woods. He made a motion for water and Elaine rolled down the driver’s side window and handed him the bottle we had. He looked spent. As he gratefully took it, he looked back up at Elaine and said, “Thank you, for giving me that, I will watch over you.” We wound our way down to the bottom and captured what vista we could with the encroaching fog.

But the view on the way up was what stunned us. It was as if the Heavens opened.

We looked for our hiker on the way back up the road, to give him some bread we had, we would have passed him since he was coming down when we were going up. He was gone. There was no trace of him…….I asked Elaine, “When you looked in his eyes did you feel something?” She said yes. Was he an angel in disguise? We may never know this side of Heaven, but two things happened on the way home that made us think maybe he could have been.

Later that day, we rounded the corner and saw a car have flipped end over end on the shoulder of the road. Let me just say. If this had happened on any other stretch of the road he wouldn’t have survived, anyone who knows Highway 1 on the Pacific coast knows those cliffs that dip their toes in the ocean. And if we had been directly behind him? I don’t like to think about it.

The car was resting on its smashed roof with the tires in the air and the driver was somehow outside the car. He was walking around it stupefied, leaning on his cane and smoking a cigarette taking pictures of the damage. We asked him if he had called already and he said he had. We continued on with our flashers to warn other cars, which did the same. There was no safe place to pull over.

The second close call came on the freeway on the outskirts of Los Angeles. Traffic had just started to move after being gridlocked and we were moving at a pretty good pace, as well as we could with heavy traffic in all lanes. Elaine saw something fly out of a truck ahead and immediately there were brake lights all around. There was nothing she could do but slam on the brakes and hold the wheel. She had to do some fancy maneuvering but even so, there was nowhere to go. We waited for the impact from behind, but thankfully it never came. Thankfully, everyone was paying attention.

The red couch landed in the lane right next to us.

After asking each other if we were okay, we took a deep breath, said a prayer of thanks and went on out way.

But not without thinking about our encounter with the hiker the day before.

This morning thought about it again as I said another prayer of thanks for those times, and all the other times where I am sure that before the Grace of God go all of us.

“For it is written, He will command his angels concerning you, to guard you carefully.” Luke 4:10 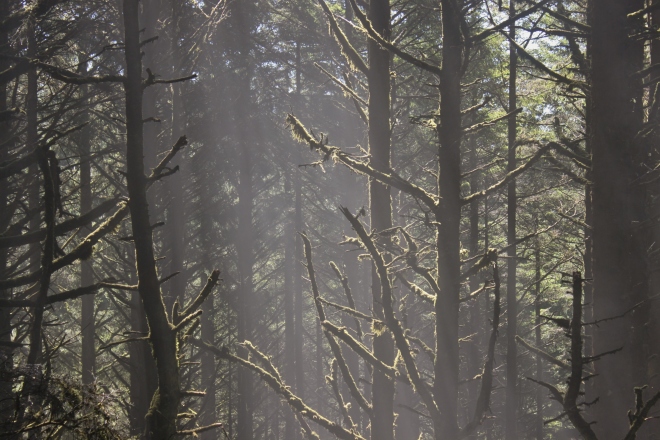