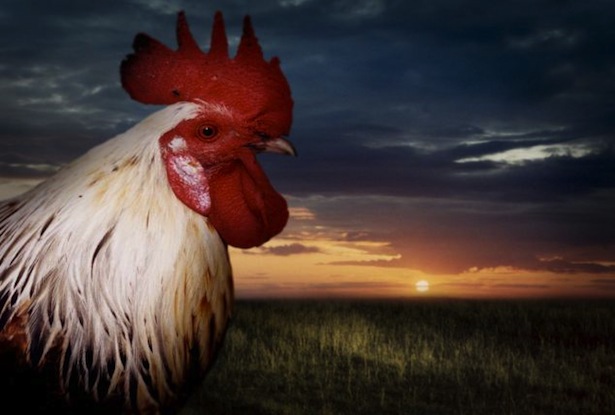 It was early, and the rooster had yet to announce the start of the new day. He was busy watching the commotion from his sentry spot on the wall. He ruffled his feathers against the cold.

The animals were restless, there was some evil afoot and they seemed to sense it. Donkey was tethered to a nearby post and moved about uneasily shifting her feet. She gave a toss of her head toward the mob of people who were moving through the street. It was quite a large crowd and there were soldiers and religious leaders, and lots of shouting and jostling. Being pushed ahead of them was a poor man. His hands were tied and he was bruised and battered.

Donkey shivered but not from the cold. She knew that man. He was the one to whom she had lent her colt just the week before. And down below stood one of the two gentleman who came to ask her master. He was standing nearby warming his hands by the fire. He seemed nervous, looking this way and that.

She brayed loudly and said, “Something is not right here rooster, that man they have there is innocent. He is a good man, a kind man. For when they asked for my colt they didn’t separate us, they led us both together. And He was ever so gentle with my baby. He is a King, I tell you!”

Rooster fluffed himself up, proudly. “Yea…..how well I know. My grandfather was one who was in the manger the night he was born. There were angels and signs in the Heavens. Oh what a glorious night that was. He watched from the rafters as the wee one was born and he saw the shepherds when they came into the stable, faces still alight with what they had just seen and heard. He crowed the dawn in on that day alright, and what a day it was.”

But this activity down below was quite a new development. He prided himself on knowing things first, but this was unexpected and it wounded his pride greatly.

Donkey said, “Don’t fret rooster. I have heard that you have yet to play a part in this drama.”

Rooster puffed himself up even bigger than he already was. “Yes, of course, as it should be. After all, this bloodline is royalty.” Speaking of his own. “It’s only fitting since my grandfather was the one to usher in the King the first time and I should be the one to usher in His Kingship the second time.”

“But this…..this doesn’t seem to be going well. I really should bring in the dawn of this new day, but it isn’t right, I tell you. I am used to crowing good news, and this is not good news at all, that He should be bound and dragged from place to place like a common criminal. Don’t they know who He is?”

Immediately down below, they heard someone question the gentlemen who was one of His friends:

“You also were with Jesus of Galilee,” she said. But he denied it before them all. “I don’t know what you’re talking about,” he said.

Then he went out to the gateway, where another servant girl saw him and said to the people there, “This fellow was with Jesus of Nazareth.”

He denied it again, with an oath: “I don’t know the man!”

After a little while, those standing there went up to Peter and said, “Surely you are one of them; your accent gives you away.”

Then he began to call down curses, and he swore to them, “I don’t know the man!”

At this Rooster could hold it in no longer, he crowed loud and long. “Nooooo……he crowed. It’s not sooooo…..” He thought his poor rooster heart would break with the sorrow of it all. He thought of how proud he was that his family had always had a part, however small, in ushering in the Good News. Now this. He would be remembered all throughout history as the rooster that crowed in disaster. He hung his head in sadness and shame. He didn’t feel like crowing anymore.

The animals watched sadly as the man called Peter fled behind a wall and wept bitterly.

Donkey hung her head, and she felt the deep sorrow that is unique to the animal kingdom alone. For they remember who made them……it’s only the human species that seems to forget.

But Rooster would soon be redeemed though he didn’t know it at the time.

For Easter was coming and he would be ready.