The day I left my hometown in 1992, there was disorder and chaos and a big moving van outside my apartment complex, and my boss pretending to organize it all. I was on the cusp of a grand adventure, moving away from the hometown and family that I loved; the place where I had always felt secure, yet at 30 years of age, I had never lived away and I felt it was a good opportunity to do something radically different.

I left behind a husband recently buried, and a lifetime of memories. Mostly all good.

It was a move to the high desert of Arizona, with the promise of pine trees and mountain tops and a bit of snow.

Two cats yowling in carriers across the desert in driving rain that came from nowhere, all these years later and that is one of the memories that stays.

That, and my Mom with tears flowing and a heart breaking for a girl that she could no longer keep safe. And a Dad trying not to cry but not succeeding. She carried out to me her most precious possession, the Bible we shared together. An old tattered copy of “The Way.” I still have it, all these years later; with both of our notes co-mingled on hope filled, love filled pages.

We built a dream home, E and I, because back then it was as inexpensive to build as to buy, so why not? A dear, sweet couple named Mr. and Mrs. Bott signed over the deed with a handshake and fifty bucks. A three-story house grew up on that lot. My room was beyond custom-made French doors on the very tip-top, and when it snowed it turned into a snow globe. If I opened my windows, I could almost reach out and touch the tops of the pine trees and in the dark early mornings an owl would hoot.

But there, even in that magical place of beauty, I never felt quite at home.

I discovered that you can’t rush healing by building a dream on top of sorrow, especially when you’re running away from the only One who can heal you.

Even so, God jogged along beside us. He touched us through some very special friends we met there, and a little brown Presbyterian church.

Then that dream died. None of our boss’s promises rang true and he stopped paying his business taxes and all of a sudden nobody was sure they had medical coverage anymore, and he started storing food and ammunition and got kind of crazy. That led to another move and a wonderful opportunity at a big company in New Mexico. It was a terrifying round of interviews, but we both landed jobs.

In Arizona, I was a small town girl in another small town, but Albuquerque was something completely different. I became swallowed up in a huge company and I floundered in a land that looked mostly like a brown paper sack. It’s only now, with some distance behind me, that I can see that it had its own brand of magic. My Mom came to visit and she was mesmorized by the clouds, said she’d never seen any quite like it.

We found a house in the exact neighborhood I said I wanted to live in. It was hilly and pretty and my boss lived right down the street. At night all the garage doors would open and swallow up the people. Nobody played outside, not in the front yards anyway.

Despite feeling lost in a giant corporation some good memories stand out from that time. Of bright-colored balloons against the sky, so many it was staggering, and my brother and sister-in-law who came for the Fiesta, all of us thinking that she was free of cancer then. I remember laughing together over icy cold Coronas under a tin roof at On the Border as the thunder rolled.

And God spoke quietly to me in the sun one day as I cracked the cover of Philip Yancey’s book The Jesus I Never Knew. That’s when I started my journey back home, back to Him.

Arizona beckoned once again with a job transfer, and another move back to a place that I considered closer to home…….it was back across the desert, with the same two cats, older now. And we landed squarely in the arms of Grace when we found a church we could truly call home.

It was peace, and grace, and prayer and the power of the Holy Spirit and traveling that full circle that made me realize that the only one I could truly trust to bring me home to healing was God, and He never left.

And of all those beautiful places, it’s this humble, manufactured home in a senior park, the one that surprises people when they walk in because it looks nothing like that preconceived idea………is the one that truly makes me cry at the thought of leaving it. This place where I pray, where I pour out my heart and He listens. 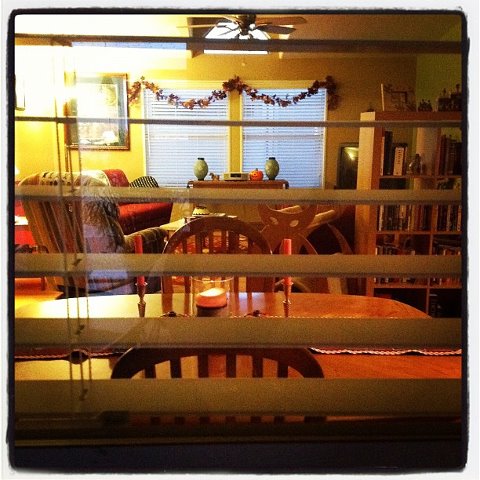 This place where a blog was born, and two cats lay buried and two more are now getting to be old men. Where the clouds roll in on summer afternoons and the thunder rumbles. Where the doves coo and the quails cry. Where we dealt with E’s Mom and the Alzheimer’s and her Dad’s death, this place is where we most feel like home because it’s where the river of His grace has carried us.

Each day, I wake up to a miracle because now I can finally appreciate the beauty of the journey.

And I pray for the grace to be ready for the next move, for there is a stirring within me to go back to the place where I began; to end my journey there. I know it’s faith that leads us all home, and I am seeking God’s face for whatever lies ahead. I find myself in a peculiar place in this journey, that of being afraid to leave and afraid of not leaving soon enough.

But maybe that’s not a bad thing, for if I didn’t have the fear, I wouldn’t need the faith.

Please join me over at the Atlas Girl Blog Tour  to help celebrate Emily Wierenga’s book launch of Atlas Girl today. It’s a must read!

One thought on “The Long Way Home”