“Seek him that maketh the seven stars and Orion, and turneth the shadow of death into the morning, and maketh the day dark with night: that calleth for the waters of the sea, and poureth them out upon the face of the earth: The LORD is his name:” Amos 5:8

Last night I stepped outside and was greeted with a “Maxfield Parrish” sky. Ever since I saw some of his art long ago, I think of him when the sky is that certain shade of inky blue…..that not quite dark cobalt, still lit from underneath by the sun’s last trace of light. I took a deep breath, thanking God for the night sky, His sky…..for the stars, the moon and placing me here at just this moment in time.

I always make it a point to go out at dusk and look for the moonrise. God’s mysterious night light. I love that particular time of the evening. There is a resigned peacefulness in the twilight when the evening sounds start to rise and everything calms down. Once again, stars appear just like they did the night before, there is security in that.The evening bird closes out the day and ushers in the night with one last song…….This one day has closed out….. and we did the best we could with it, and it is enough.

The other night it was a harvest moon. As I saw the glow of it rising over the Superstition mountain ridge, it almost took my breath away…it was huge and otherworldly, like it was too big for the horizon. I was in the car and I wanted to pull over so I could watch the whole performance, but I had to be content with watching it the best I could while driving down the freeway.

In ancient Israel it was common for people to sleep on the rooftops. Maybe because it was cooler outside, and probably there was more room. They spent a lot of time watching the sky……watching, and waiting too. For a Messiah that would be preceded by a strange star…..If there was some new star there they would have known it immediately.

They read the book of Numbers, they had read the Prophecy
“I see him, but not now; I behold him, but not near. A star will come out of Jacob; a scepter will rise out of Israel…….Numbers 24:17

I don’t know who taught me to be a sky watcher and I’m not sure when it started….. 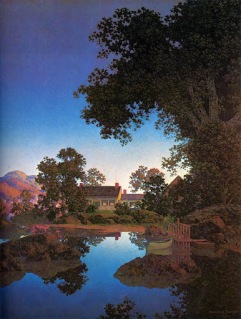 When I consider your heavens, the work of your fingers, the moon and stars, which you have ordained; what is man that You take thought of him, and the son of man that You care for him? Yet You have made him a little lower than God, and You crown him with glory and majesty! Psalm 8:3-5

Now my brother is teaching my Niece to watch the sky too, I think it’s great. Every evening they are together they go out and look for the moon……and everytime the moon is a very small crescent, my Mom thinks of me from California.
﻿

4 thoughts on “Watching the Sky”