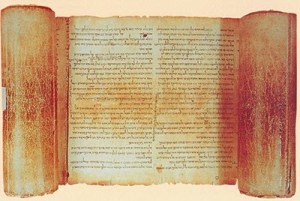 “And He came to Nazareth, where He had been brought up; and as was His custom, He entered the synagogue on the Sabbath and stood up to read. And the book of the prophet Isaiah was handed to Him. And He opened the book and found the place where it was written….”  Luke 4:17
“The Spirit of the Lord is upon me, because has anointed me to preach the good news to the poor. He has sent me to proclaim freedom for the prisoners and recovery of sight to the blind, to release the oppressed, to proclaim the year of the Lord’s favor……
Notably, he stopped before He finished the entire verse which ends with …..and the day of vengeance of our God, to comfort all who mourn. Isaiah 61:1,2
Why did He stop there? Because it wasn’t the time for judgment yet, it was the time for open arms reconciliation for a people who desperately needed God’s love and forgiveness. Although Jesus said that time would surely come, His first coming was to draw us close, back into the loving arms of God.
“Then he rolled up the scroll, gave it back to the attendant and sat down. The eyes of everyone in the synagogue were fastened on him, and he began by saying to them, “Today this scripture is fulfilled in your hearing.” Luke 4:20,21
I can imagine the stirring and rustling, nervous clearing of throats. They knew Jesus, they knew His family, they knew what they expected of the future Messiah and this wasn’t it. It was a huge stumbling block that they just couldn’t get around, even though they were amazed at His authoritative teaching. This was not good news for them. Jesus kicked the gate wide open for everyone to be able to receive salvation. They thought God’s favor was for themselves alone.
Jesus knew those words spoken in His hometown synagogue would be inflammatory, but He had to speak them anyway. Ever feel led by the Holy Spirit to say something that you knew would cause an unfavorable reaction?
He further incites them when He insinuates that it was because of their hard hearts that they refused to see who was standing right in front of them…..Their Messiah had come, but their own pride refused to let them believe it. “All the people in the synagogue were furious when they heard this. They got up, drove Him out of the town, and took Him to the brow of the hill on which the town was built, in order to throw Him down the cliff. But He walked right through the crowd and went on His way.” Luke 4:28,29
There are many people right up to the present day who refuse to accept who Jesus really was, but the fact is, Jesus is God. Not only that, He is the only way to Heaven. He is God with arms of grace, extended for all who call upon His name. He wants to draw us close. He longs for it more than we can ever know, and all we have to do is reach out and take it. But to some people this is not good news. This kind of thinking is not popular in our politically correct, inclusive world. If we tell people this we will be labeled narrow minded, bigoted, backwards, simple-minded and archaic. If that is true, then I guess Jesus is all those things too!
The greatest tragedy is that some will miss out on God’s grace and forgiveness only because of the barriers in their own minds and hearts. Jesus removes walls. He removed them then and He removes them now. When He was on this earth, He systematically removed every single barrier the religious system of the day had set up. He took time for anyone with a need. He sat with sinners, the unclean, the broken, the sick, even with the ones who thought they had it all figured out.
He wants to draw you close today. Do you have a need? He stands ready to meet it, whatever it may be…..
I continue the counting of blessings today…..that I can recognize the mark of God in all these moments, #451 encouraging words from other bloggers, #452 the grasp of a hand across a table, #453 prayers that I know are heard, #454 the life in His words, #455 the kindness of strangers, #456 sunrise of pastels that change with each second, #457 the busy cactus wren outside my window, #458 talk of God between friends, #459 music that brings us to the throne #460 all who find rest from their labor today….

2 thoughts on “Good News for anyone with a need….”