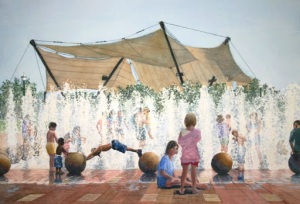 My brother took my little niece to a park last weekend where they had an interactive water feature. My Mom and Dad went along too, although my Mom was not going to go at first. Sitting at a park is not really her idea of fun at 81 years of age, with two knee replacements behind her. She says they never have enough benches. But she ended up going anyway and had a great time.

Lauryn is slightly Autistic, so they weren’t really sure how she would handle it, since there were so many kids of all different ages. Usually, if Lauryn sees water anywhere there is no way to keep her out of it, but there was this multitude of kids factor, so they decided to just wait and let her watch for awhile.

For a time, she crept around the outskirts. She watched all the activity and battling within herself, she started to circle closer and closer. Slowly the lure of the water overcame her trepidation of all the other kids and she plunged in. Oh what joy! She played for two hours nonstop. My Mom, always with her Spiritual eyes and ears open, sensed that she was witnessing something that held an important lesson for all of us.

Here they were, all different kids, all different races, all different ages, and all of them so caught up in the joy, the glee of playing, that the thought never occurred to them not to get along. Kids have no clue, no awareness of their differences until we make them aware of it. That is, they see the differences, but it doesn’t really matter to them.

At one point, Lauryn and another kid, a bigger kid, were running to the same rock to sit down on when the water stopped. My Mom wasn’t sure what would happen, but the kid happily gave up the rock for Lauryn. Yes, a bit of Heaven right there.

It was, she said, “a bit like Heaven will be.” That was Jesus prayer when He said, “Thy kingdom come, thy will be done on earth as it is in Heaven.” Are we there yet? Is it possible? Absolutely it is. We see it happen everyday, in worship centers, at sports events, at movies, restaurants. Different people getting along. We see it in catastrophes too, (think 9/11).

So I think our next team builder at work should be at a water park, and everybody has to go in and get wet!

After this I looked and there before me was a great multitude that no one could count, from every nation, tribe, people and language, standing before the throne and in front of the Lamb. They were wearing white robes and were holding palm branches in their hands. And they cried out in a loud voice: “Salvation belongs to our God, who sits on the throne, and to the Lamb.” Revelation 7:9,10

2 thoughts on “Heaven at the water park”