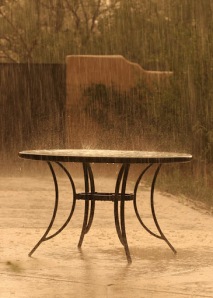 “In the six hundredth year of Noah’s life, on the seventeenth day of the second month—on that day all the springs of the great deep burst forth, and the floodgates of the heavens were opened. And rain fell on the earth forty days and forty nights.” Genesis 6:11-12

I am celebrating rain today. We finally had the kind of rain that people in the desert dream of. Sideways, torrential rain. All this rain puts me in mind of Noah. I am trying to imagine the kind of faith it would take to keep on building an Ark for anywhere between 55 to 75 years. (This figure was developed by a very smart Biblical research guy, not me.) I also could not find anywhere in the Bible where it says that the people taunted Noah while he was building it, but given the cultural climate I would say it is a strong possibility they did. The LORD saw how great man’s wickedness on the earth had become, and that every inclination of the thoughts of his heart was only evil all the time. Genesis 6:5

Ever had someone say to you, “You really believe all that stuff?” Referring to the events in the Bible. They look at you with a bemused mixture of disbelief and bewilderment, and sometimes downright anger depending on who you are talking to. You may as well have just told then that aliens had kidnapped you from your bed and then flown you back to earth in time for work.

All the while Noah just kept hammering away, mixing up more pitch and sawing up more cypress. And watching the sky….It must have been very hard for he and his family. Lets face it, if we are to be honest, even if a 8 foot tall heavenly messenger came complete with thundering voice and glowing countenance, sooner or later they go away and you are left with insulting crowds and a clear sky with no rain in sight.

He just kept building. Just like we keep on believing. We belong to the family of Noah after all. When we really start to count up the ways we exercise our faith on a daily basis, we realize we have quite a bit in common with Noah after all. We pray to a God we can’t see and we believe He answers and we look to the sky just like Noah did.

“Noah was six hundred years old when the floodwaters came on the earth. And Noah and his sons and his wife and his sons’ wives entered the ark to escape the waters of the flood. Pairs of clean and unclean animals, of birds and of all creatures that move along the ground, male and female, came to Noah and entered the ark, as God had commanded Noah.” Genesis 7:6-9

I wish I could have seen it. All the animals walking peaceably side by side, leopards, elephants, goats, crocodiles, as Noah stood by the door with his staff….Thank you God for Noah’s great faith, and for the rain.