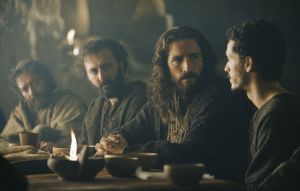 “One of you will betray me….”
An intimate celebration of Passover between close friends….the sharing of a meal, the singing of a hymn, the tenderness and humility demonstrated by Jesus during the foot-washing….and all that harmony is shattered when He says, “One of you will betray me….” and then horror and disbelief as each disciple no doubt begins to look inward, each to himself. “Surely not I, Lord.” There was a foreshadowing of doom that they were all afraid to address. It began when Jesus told them what had to happen once they got to Jerusalem.

The chaos starts when Judas dips his hand with Jesus……”Jesus replied, “The one who has dipped his hand into the bowl with me will betray me. The Son of Man will go just as it is written about him. But woe to that man who betrays the Son of Man! It would be better for him if he had not been born.”

And then…”As soon as Judas took the bread, Satan entered into him. “What you are about to do, do quickly,” Jesus told him,” John 13:27

I think of all the events of that sorrow filled night; I think of Peter, bold, courageous, outspoken. The one who jumped out into the storm tossed sea to run to Jesus. He wasn’t a timid man by any stretch, and yet the chaotic horror of that night was too much even for him. He caved in to fear, and yet….. “Peter followed at a distance.” Luke 22:54

I like this commentary by Dr. Ralph F. Wilson:

Peter is courageous and bold — he wants to be near his Lord in his hour of need. But Peter is terrified, also. He is in danger and knows it. And as he sits near the fire, he begins to wonder what might happen. As long shadows dance in the firelight, Peter’s fears continue to grow. What if I’m recognized? How can I hide when it becomes light. What should I do if I’m identified by someone who was there?

Peter strikes a cord with all of us because he is a part of us, really. We have the same fears, failings and weaknesses. But as Jesus completely restored and forgave Peter, he forgives us. That is the grace of Easter, fellowship restored! Each new day gives us a chance to start again with Jesus.

“How great is the love the Father has lavished on us, that we should be called children of God! And that is what we are! The reason the world does not know us is that it did not know him.” 1 John 3