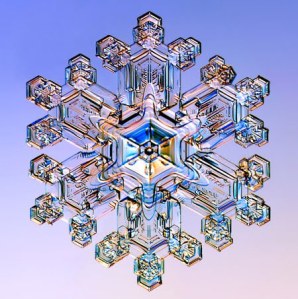 Enough about the science! The point is, God could have just made them look like formless blobs, but he didn’t! He is the original Master, and His Masterpieces are everywhere including you and me.

Last year I found a beautiful book at Barnes and Noble. On each page was a closeup of a different snowflake, about 200 in all. I just had to marvel again at the creativity of our Creator….nature speaks loudly for all who have the eyes to see and the ears to hear with….

“The heavens declare the glory of God; and the firmament sheweth his handywork. Day unto day uttereth speech, and night unto night sheweth knowledge. There is no speech or language, where their voice is not heard.” Psalm 1: 1-3