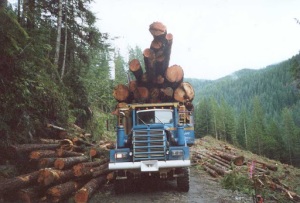 Have you ever met anyone who would just try anything? They seem to sail through life devoid of fear, embracing change and leaping over roadblocks and challenges that would cripple the faint of heart. The reality is: they DO have the fear, they just don’t let it stop them.

My best friend is one of these people. I think it comes from living in an “unsafe” environment growing up. She had a mean older brother and every day she was faced with waking up having to push through her fear of what he might do. She knew that her folks would do nothing to stop his behavior; they never had. So it was up to her to push through…..As a result it left scars, but it also made her a survivor.

When she was 18 a friend offered her a job driving a logging truck. Here was his lesson, “I will drive up the mountain, you watch what I do and it’s your turn on the way down.” Mind you, these trucks have two gear boxes and sometimes as many as 16 gears! She made it down the mountain and got bit by the professional driving bug.

Later on she drove a cement truck for several years, until the day another truck driver pulled out in front of her. He was completely stopped at a stop sign. (Tell me how you miss a cement mixer?) He looked right at her and pulled out. She sustained a broken back and the other driver was unhurt. His license was revoked and he was cited. The police officer said that if it hadn’t been for her exemplary driving skills, they both might have died. She has since said that the accident was the best thing that ever happened to her….I met her not long after that and as a result, I introduced her to the One who not only could heal her body, but her soul as well.

I never had to fear that much growing up. My home was a calm, peaceful, happy place. However, when I was 27 and my husband died unexpectedly I was introduced to real fear. It stretched out in front of me like a “black hole.” I got reintroduced to prayer like never before and I learned that when I didn’t have the courage to get out of bed, I rolled out anyway on raw faith; knees hitting the floor first! Everytime He met me there. Through those experiences, I learned that His promises are true.

Now all these years later I am working at a place I never dreamed I could be, doing things I never thought I could do. Fourteen years now at Intel,Corp. Always there has been help. At every turn He has been with me, and sent special “angel” people (and undoubtedly real ones too) to surround me during times I felt like I would cave in and run home. (Well, I did do that but only once.)

Whenever I feel fear nipping at my heels, telling me I can’t do something, I rest in this verse: “I can do ALL things through Him who strengthens me.” Philippians 4:13
Depending on Him through prayer, reading His word, believing Him for His promises. That is the only way to banish fear and send it packing back to hell, where it belongs.

For God has not given us the spirit of fear; but of power, and of love, and of a sound mind. 2 Timothy 1:7

One thought on “Pushing through fear”