Everyone then who hears these words of mine and does them will be like a wise man who built his house on the rock. And the rain fell, and the floods came, and the winds blew and beat on that house, but it did not fall, because it had been founded on the rock. Matthew 7:24

The first tree toppled when nobody was home. It was down by the river and we were shocked to see it laying there like the dead thing it was. On further investigation, we saw that it did hit the little Art Gallery aka Prayer Closet but absolutely nothing was damaged. This was the first miracle. 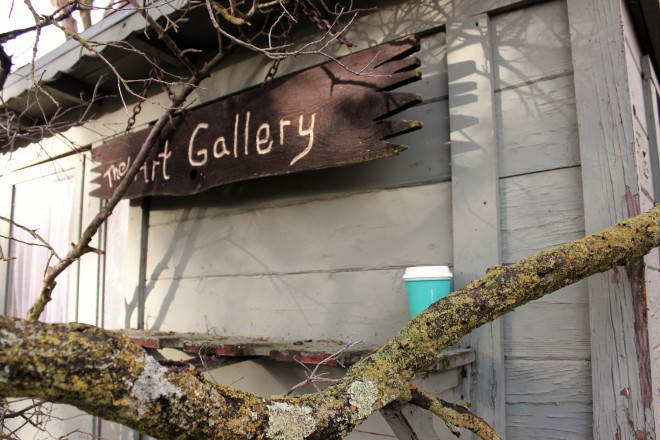 We have managed to move back to California during the wettest year since the drought started and the soil just can’t soak up the rain fast enough. It is desperately needed so no one was complaining……at first.

Over the next several days, torrential rain beat down on the already saturated ground. Then the winds started and that was the scary part. We were all sitting in the living room while the storm raged outside and we heard an ominous sound directly in front of the house. My Aunt’s dogs went crazy and all three of us leaped to the window and couldn’t believe what we saw. This was the end result. The tree was between 80 and 100 feet and it was down. We were in shock. It broke a water line but thankfully, someone came out that night and capped the line. A friend to the rescue. We had been nervous about that tree because it was very top-heavy. That day no one could get in or out of the driveway, but the house was not hit. Miracle number two.

By then we were all shell-shocked. And the rain continued. Trees fell all over town, fields flooded, the river was rising……we went down each day to watch its progress. Usually it just meandered along silently but now we could hear it. We took all the safety precautions, prayed, pulled the slide-out in on the motor home to try to save the canopy but we all felt like sitting ducks. No one loves trees more than me, but now every sound of the wind moaning as we lay there trying to sleep was nerve-wracking. The trees almost felt treacherous.

Around 3:00 Sunday morning everyone was awake. Power was going out all over town. Transformers blew, we could hear them like fireworks. Sleep was impossible. Elaine had turned her phone off and had just happened to look at it when the call came through from my Aunt. Another tree had fallen in front of the house. It grazed the windows coming down and she had just checked on the dogs who were restless and barking when it fell. She was in the exact spot in the house where it came down, but thankfully, miracle number three, no damage! Here’s the neighbor cat checking it out.

Yesterday after it happened, the neighbor came with his chainsaw and started cutting. Then he called for reinforcements and we experienced what good neighbors can do when they all work together. It was a beautiful thing. They cleared us a path, and by the time they were done it was pouring rain again.

Today, the tree guys came and then cleared out the remainder of the mess in the driveway. They came in like gangbusters, those guys. The had the chipper and blower working and everything cleared out in no time.

And today we were blessed with a little blue sky. I slept better last night than I had in awhile, because even though there was rain, there was no wind. During all those storms, we were praying so hard for calm. Just peace.

For now, it’s over. We count ourselves extremely fortunate that nobody was hurt and there was no damage to the house, but sadly for others across our nation this is not the case. Tornados, snow, ice, loss of homes and lives, heartbreak and destruction. I pray for them all. And not only physical storms but the ones that take place in our hearts and lives.

We all just want the same things, calm and peace. I have a feeling we will remember this for the rest of our lives, and there have been good things come out of it too. We have stories to tell. And in the chaos, a balloon stuck to the fallen tree reminded me that Birthdays are still being celebrated. Life is still being celebrated.

After these storms, I will never forget how deep the silence felt.